all live streams shut down in attempt for media blackout 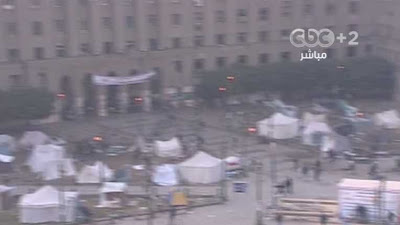 and after the attack

Next military clear nearby squares

and chase protesters into the upper class nieghborhood of zamalek

later in the early afternoon

This report from aljazeera english was their last

In his public address, the Ganzouri reiterates a promise he made when the military generals appointed him after the most recent massacre in Tahrir square end of November

"I said and I am still reiterating that we will never confront any peaceful demonstrations with any kind of violence, even the verbal kind," he said. "I am committed to this."

after seeing these images, judge for yourself

other reports of cameras confiscated, broken, journalists harassed and threatened by phone

thank you world for believing in our "democratic transition," this is why we don't go to vote. the generals overseeing this massacre oversee our elections

the reason we held the #occupycabinet sit-in at the parliament building was to protest the illegitimacy of the appointment of x-muburak era prime minister kamal ganzouri who justified all these attacks, calling to an end to military trials of civilians, calling for the trial of those carrying out these violent crimes

around 6pm December 17th a massive march streams into Tahrir square in memory of Sheikh Effat, one of the demonstrators the military had murdered the day before.

and all this in light of yesterdays violent attacks, arrest, torture, murder of demonstrators

philip rizk
i film, i write, i protest. i am a part of the mosireen media collective. many of the things i write in scattered places you will find on this blog